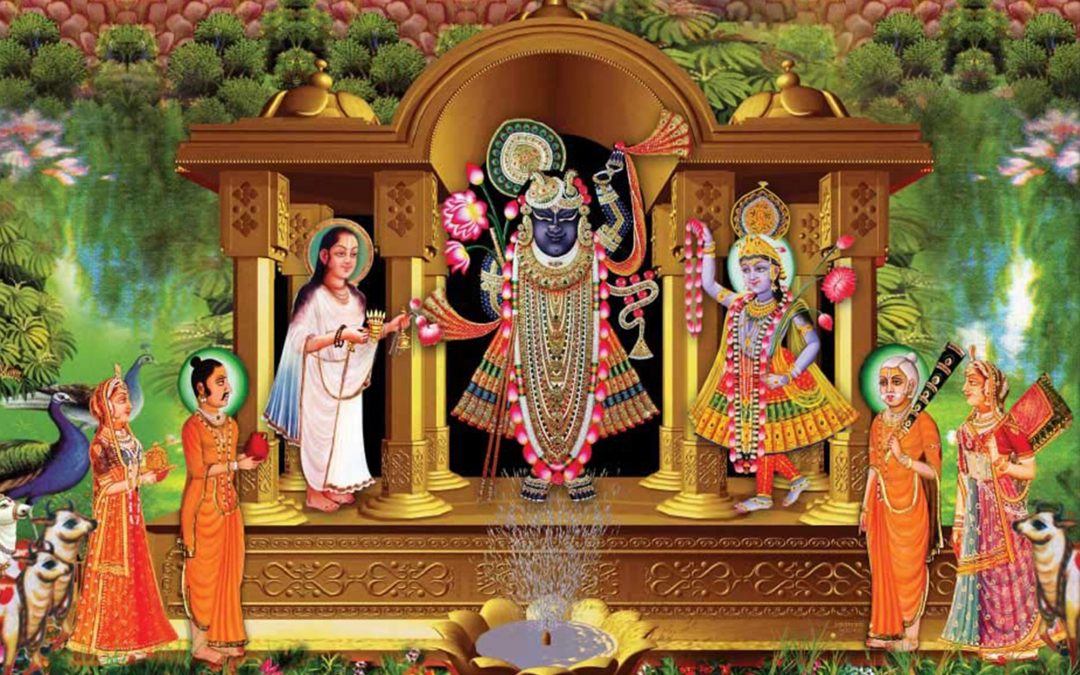 Adhyatmik: Shree Yamunaji’s nature and importance is, the one who, knowingly or unknowingly takes the divine water of Shree Yamunaji, all his sins gets destroyed, all obstacles coming in the way for Bhagwad seva will get destroyed etc.

There are basically four Yuthas (Groups) of Shree Swaminijis of Shree Krishna. The categorization is based on the divine attributes that each Swaminiji have.
The four groups are described as below in sequence:

Appearance of Shree Yamunaji:
According to the Yamunamahatmya canto of Padma Purana, the Rigveda, Yajurveda and Samveda are also known as “adhitya”. “Aditya” is the another name of purna purushottam. The adhibhautik swaroop of “aditya” is the Sun (Surya) that we daily perceive. Shree Purna Purushottam is of inifinite ras. This ras (anand) is itself Shree Yamunaji. Vedas also describe that Shree Yamunaji appeared from the RAVI MANDAL. The Physical form of Ravi mandal contains the Spiritual form (i.e. Adhyatmik Form) in the form of Vedatrayi. This Spiritual form will contain the divine form (Adhidaivik Form) i.e. Purna Purushottam. Shree yamunaji appeared from this adhidaivik form of Ravi mandal.

Description of the Swaroopa of Shree Yamunaji:

Shree Yamunaji is the bestower of all accomplishments of pushtimarg.

Shree Yamunaji is the bestower of divine body to pushti-being so as to make it suitable for the seva of Shri Krishna
The touch of Shree Yamunaji’s water is similar to that of Lord Shri Krishna.